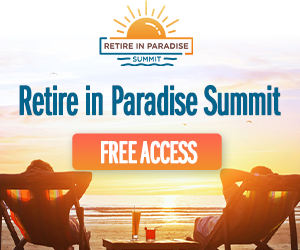 Discover how to do it for just $20,000 a year at the Retirement Event of the year.

During this 7-day online event, 19 experts will share their secrets to retiring in style— in places like Italy, France, Spain and Portugal.

Claim your free ticket to the Retire in Paradise Summit

Retire Early and Travel the World

Best Places in the World to Retire in 2022

Second passports and residence in other countries have long been appealing to Americans for any number of reasons. These days, that interest is clearly rising—sharply. All over the internet you’ll find resources to help you with this process, whether that means buying a passport or tracing your genealogy in hopes that a relative’s original citizenship will magically descend upon you, too. Those are tried and true paths, for sure. But one—buying a passport—requires a minimum of $100,000. And the genealogy route is hit or miss, depending on country.

There is, however, a less-costly, more-organic, nearly assured path: Move somewhere and gain citizenship—and a passport—via the naturalization process.

While lots of countries require that you live within their borders for a decade or longer before you can apply for citizenship, several impose a much-shorter timeline of between two and five years. And as a U.S. expat who’s lived in Prague now for nearly two years, I can tell you those years fly by quickly.

So, if you’ve ever given consideration to securing citizenship and a second passport, here are several countries where the process of citizenship-by-naturalization is relatively quick.

Editor’s note: If you don’t already have a second passport, why not? It may be the most essential tool available to you in today’s world—because it gives you options. It opens doors that might otherwise be closed to you. All you need to do is take the first step. Subscribe to International Living today.

You will find lots of misinformation on the internet regarding Argentina. These are the definitive requirements:

And that’s it. Two short years in one of the world’s truly beautiful countries and you can apply for citizenship and, thus, an Argentine passport—the 19th most-powerful passport on the planet in that it gives you access to 170 countries without needing a visa.

Yes, Argentina seemingly has a financial crisis du jour. Still, if your life is denominated in dollars, your lifestyle in the land of tango will be pretty sweet. Argentina allows you to hold dual nationality as an American.

The asterisk here ties to Peru’s requirement that a non-Peruvian can apply for citizenship two years after acquiring residence in the country. That’s not hard; with the correct documents you can apply for Peruvian residence while you’re visiting on a tourist visa. But it could take several months to complete the residence process. Once you’ve been a resident for two years, you can apply for citizenship. The necessary documents are similar to those in Argentina, but there are also requirements that you:

Ecuador demands three continuous years, and if there is an interruption of more than 90 days, you have to start over.

Editor’s note:If we have learned anything, it’s that anything can happen. That’s why it’s so important to be prepared. There has never been a more important time to have a second passport. A second passport is the ultimate insurance policy that guarantees protection, privacy, freedom and more. All you need to do is take the first step. Subscribe to International Living today.

Honduras shortens the requirement to two years if you are Ibero-American (from a Spanish or Portuguese-speaking country).

Poland is interesting because it’s a European Union member, meaning this is the quickest path to an EU passport. You’ll also need proof of a stable source of income, such as Social Security or a pension. Perhaps the hardest requirement: proof—by way of official certificate—that you can speak Polish, not one of the world’s easiest languages for native English speakers.

Paraguay is straightforward: Live there for three years as an upstanding citizen.

Very much like Paraguay in how easy it is. Four years of continuous residence in the country, command of Portuguese, and no criminal record.

This is not a complete list of the five-year countries. Quite a few others impose requirements that make them less appealing (Indonesia and Japan require that you relinquish your U.S. nationality), or they’re countries most of us won’t rush to, such as Iran, Congo, or Afghanistan.

Most of these countries are straightforward: five years of continuous residence. Finland requires you speak Finnish or Swedish, the Netherlands requires you’re conversant in Dutch, and Thailand demands you speak Thai (again, quite the challenging language).

Panama wants to know you can speak Spanish and have a basic understanding of Panamanian history, geography, and politics.

Editor’s note:A second passport offers many benefits. Best of all, you may be able to pass on any citizenship rights you have to your children and grandchildren. Having a second passport is your right and it is completely legal. To find out how to claim yours, simply subscribe to International Living today.